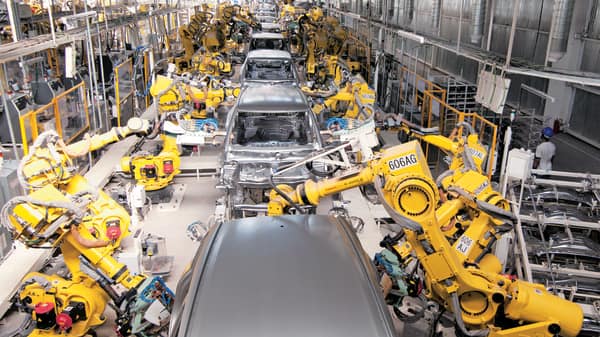 Tumbling auto sales in May reinforce the gloom surrounding auto firms. Data released by the Society for Indian Automobile Manufacturers Ltd on Tuesday showed a drop in domestic wholesales numbers across segments. This reinforces a weak demand sentiment in the market, even as it implies high inventory and weaker retail sales.

It looks like passenger vehicles (PV) and medium and heavy commercial vehicles (M&HCVs) were worst hit. Sales in May contracted sharply by 20.6% and 19.7% from the year-ago period in these two segments, higher than 17.1% and 13.6% seen in the month of April. That’s not all. Over the past week, seven out of top ten PV firms have announced prodution cuts for the month of June. If some have called it a routine maintenance shutdown, others have stated their intent to align production with dealer inventory levels.

Media reports indicate that PV leaders such as Maruti Suzuki India Ltd, Tata Motors Ltd, Mahindra & Mahindra Ltd in the listed universe along with others such as Skoda Auto and Honda Cars India have had to trim production.

In M&HCVs, the fall was led by Tata Motors’ 38% decline, year on year, while Ashok Leyland sales saw a small single-digit contraction.

According to Arya Sen of Jefferies India Pvt Ltd, two-wheeler sales dropped too, but it was less painful than in the month of April.The delayed marriage season helped to improve motorcycle sales during this period.

Yet, there are concerns of production cuts in two-wheelers too, in the future months. Inventory is over 45 days for most companies. Some analysts reckon that the cost of ownership due to new technological compliances will hurt two-wheeler users the most, unless companies bear the burden of higher costs.

According to dealers, the trend has not improved so far in June. Another bad month will imply a weak June quarter performance by auto firms. As such, the Nifty auto index has been toeing the line of falling sales. It is down 25% in a year compared to the Nifty, which has risen by about 10%.