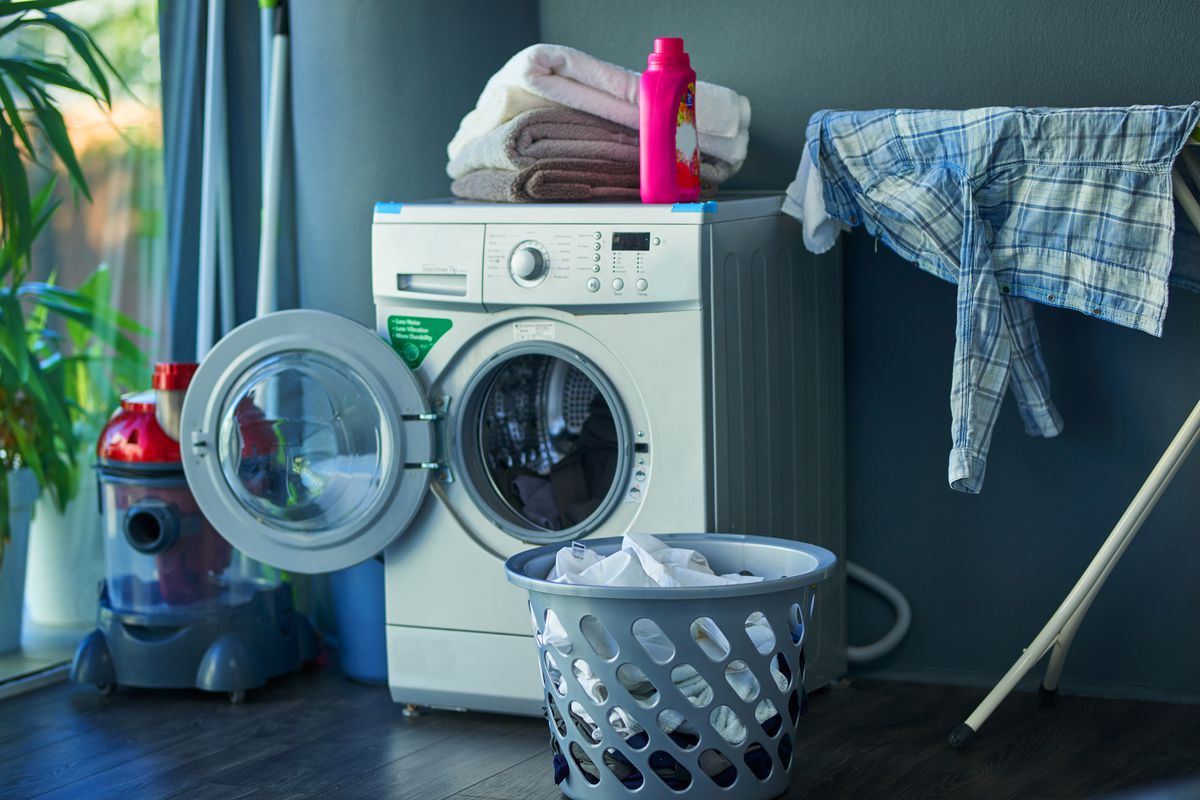 It’s been a banner few years for people who hate doing laundry. A slew of brands has arrived promising that you can wear their products for days, weeks, or months straight without ever putting them in the wash.

Wool & Prince started the trend in 2013 with a Kickstarter that collected 10 times their goal of $30,000 by promising that their merino wool button-downs could be worn for 100 days straight. Dozens of athletic brands, including Lululemon and Patagonia, treat clothing items with nanosilver particles to fight odor.

Earlier this year, Unbound Merino released a collection of men’s T-shirts, socks, hoodies, and underwear (and one women’s shirt), promising you could travel without any luggage. As I write this, I’m wearing a cotton and seaweed fiber T-shirt by Pangaia treated with antimicrobial peppermint oil to prevent odor for the fourth time. The company claims the peppermint will help you save 3,000 liters of water over its lifetime by skipping laundry.

There are a half-dozen reasons we would want to wash our clothing less. It’s much more convenient and affordable, especially if you travel a lot or don’t have an in-home washing machine. Frequent washing also shortens the life of your garments, fading the colors and pulling at the seams.

It’s also better for the environment. Every time we wash synthetic clothing, plastic microfibers wash out and right past water treatment plants into our rivers and oceans. A 2017 study found these microfibers in 83 percent of tap water samples tested globally.

Washing clothing, especially in hot water, is water- and energy-intensive. McKinsey found thatwashing and drying 1 pound of clothing over its lifetime on average emits 11 pounds of greenhouse gases. Levi’s found in its most recent lifecycle assessment of its jeans that up to 40 percent of the climate impact and 23 percent of the water used over a pair of jeans’ lifetime is during the consumer phase, though a German study found that the amount of water used to grow cotton exceeds by a much bigger margin the water a consumer will use to wash a cotton piece. In any case, using less water is still great, especially if you live in California.

And dry cleaning your dress shirts, aside from costing you time and money, exposes the environment, workers, and potentially you to a carcinogenic and neurotoxic substance commonly known as PERC, which is still used at 70 percent of dry cleaners nationwide.

But washless clothes don’t come cheap. Men’s silver-infused shirts from Lululemon are $10 more than similar shirts, Wool & Prince dress shirts can be compared in price to Brooks Brothers, and Unbound Merino charges a pricey $65 per T-shirt. Pangaia beats them all at $85 per white T-shirt.

Is it worth it to pay a premium for “washless” — or more accurately, “wash less” — clothing? Or could you just, you know, decide to wash your clothing less? Let’s go beyond the anecdotal consumer test and look into the research.

The science of smelly polyester

Rachel McQueen, an associate professor in the Department of Human Ecology at the University of Alberta, has smelled a lot of dirty T-shirts. She researches how our skin’s microbiome and body odor interacts with the clothing we wear, and explains that sweat itself is sterile and odor-free (unless you’ve just eaten a lot of garlic) but as soon as it meets our body’s bacteria — which varies from person to person — it’s metabolized into volatile, gaseous compounds that float to our noses. This tiny world of sweat, bacteria, and odorous compounds then transfers to our clothing.

Brands that market their clothing as odor-fighting — from silver particles woven into the fabric, to a finish of triclosan or triclocarban, and fabrics such as bamboo rayon, merino wool, or saltwater seaweed fibers — almost always attribute it to the fabric’s supposed antimicrobial qualities. But according to McQueen, this can be misleading. Yes, the bacteria can continue to munch on your sweat and produce odors after they hitch a ride on your yoga tank, so in theory, incorporating antimicrobial ingredients into your clothing would help. But what really matters is whether the stinky, oily compounds the bacteria has produced will stubbornly cling to your shirt or drift away on a breeze. That is determined by the type of fabric.

SWEAT ITSELF IS ODOR-FREE, BUT AS SOON AS IT MEETS OUR BODY’S BACTERIA IT’S METABOLIZED INTO VOLATILE, GASEOUS COMPOUNDS

Polyester and other petroleum-based fibers are hydrophobic, or what athletic brands call “sweat-wicking.” They repel water and dry quickly. The downside is that they attract the oily compounds that cause body odor. “These oily compounds, they go woosh! into polyester,” McQueen says. These compounds can build up over time until one day you’re pulling a supposedly clean workout tank from your drawer and wrinkling your nose.

Natural fibers, including cotton, merino wool, and rayon made from bamboo, trees, and — yeah, sure — seaweed, are hydrophilic, meaning they love water. That’s why cotton gets so sopping wet when you workout. “But this ability to love water means laundering is way more effective because the water can get in there with the detergents and help release these compounds,” McQueen says. Merely hanging a wool or cotton shirt up after you wear it allows the moisture to evaporate and bring the odor with it, though. Bing! A fresh and clean T-shirt in the morning — no washing required. Plus, merino wool tends to dry more quickly than cotton, making it a good choice for athletic apparel. (And shoes, as Allbirds boasts.)

So, yes, Unbound Merino’s and Wool & Prince’s washless claims hold up to scientific scrutiny. “If you exercise in merino wool, you don’t have to wash it every time,” McQueen says. “And you shouldn’t, it’s not good for it.”

But they’re not the only merino wool brands out there, they just have the most pointed marketing. Outlier, which creates bike-to-office clothing for men, has a merino wool tee. Smartwool’s raison d’être is providing merino wool gear, though its offerings stylistically are more for hiking.

Is silver really anti-microbial, and does it matter?

McQueen has found in her research that silver isn’t as effective at killing germs in the real world as it is in lab tests, unfortunately. “I get into trouble,” she laments. “Some companies don’t like me because I say that I’m skeptical about the finishes on polyester. I’m open to it, I just haven’t come across it yet.”

Conclusion: If you’re wedded to wearing polyester or nylon workout gear (and we get it, it looks much better than cotton gym shorts), then a silver treatment could help prevent a permanent sweat stink from developing. But you still should throw synthetic garments — from nylon yoga leggings to acrylic sweaters and polyester blouses — in the laundry before you wear them again.

But wait! Silver nanoparticles can wash into the environment, and if they are in high enough concentrations (for example, outside of a poorly regulated factory that manufactures silver technical fabric) they can be toxic to aquatic life. There’s also some concern that when you sweat, they’re absorbed into your bloodstream — but it’s hard to know if particles like these do so at high enough levels to be bad for you. The industry standard is for silver-impregnated fabric to last 50 washes, though some fabrics, like those from Gap’s new eco-friendly men’s athletic brand Hill City, now have silver woven into the fabric to prevent it from washing out, and Patagonia says its silver particles are too big to be absorbed into the bloodstream.

Ably Apparel promises that its men’s and women’s cotton basics are stain- and odor-repellent thanks to a mysterious proprietary coating called Filium they say is eco-friendly. Having worn one of their T-shirts multiple times a week for a year of intense travel, I can tell you that the anti-stain promise seems real — my white T-shirt made it 14 months without picking up a permanent stain of any kind, even yellowing under the arms. As for odor? It would develop after a day on a plane, but sometimes aired and always washed right out.

A greener and cheaper strategy might be to just hang your clothes in the sunshine to kill any lingering bacteria and let the breeze waft away the odorous compounds. Avid vintage shoppers swear by spraying vodka or vinegar on their finds to get rid of the smell of previous owners.

Just keep in mind that all the research so far has been on odor resulting from underarm odor and not from — hmm, how shall I say this? — feminine discharge. The experience of a couple of brave female Buzzfeed staffers who tried wearing Organic Basics underwear for a week proves the point. Men: Silver could perhaps address the bacterial cause of urine’s smell, and merino wool undies might hold up, but you still need to air them out at night.

Yes, most of these brands are for men. Maybe women are less likely to want or be able to wear the same gray shirt five days in a row on a business trip. I’m certainly interested in incorporating more merino into my wardrobe … to a point.

Everyone can just chill out

Finally, understand that likely nobody can smell yourself as much as you do. “We do have this paranoia about odor,” McQueen says. “This is a little bit anecdotal, but has evolved over my years of experience dealing with smelly T-shirts that other people have worn.”

McQueen’s research lab screens potential participants, looking for people whose t-shirts retain their body odor. And many people (and their flower-fresh tees) don’t make the cut. “I think we become very attuned and sensitive to our own body odors, because we are close to it, but that doesn’t mean others can smell it,” McQueen says. She suggests asking your partner or a trusted friend or roommate to sniff your clothing if you’re unsure.

“I THINK WE BECOME VERY ATTUNED AND SENSITIVE TO OUR OWN BODY ODORS, BUT THAT DOESN’T MEAN OTHERS CAN SMELL IT”

“I’ve had a friend who’s said, ‘Oh my goodness, this is my smelly T-shirt.’ And I smell it and go, ‘That doesn’t smell too bad. You should smell this.’ And she smells it and goes, ‘That’s not bad.’ And I go, ‘Seriously?’”

If you do have a particular problem with body odor, it might indicate you have a mix of bacteria in your armpits that produce an especially pungent smell. For some, getting a donation of pit bacteria from a sweet-smelling friend might help. But most people? You’re fine.

In the end, you don’t necessarily need to buy washless clothing to wash your clothing less. Denim — especially traditional, non-stretch denim that is 100 percent cotton — can go a couple of weeks without being washed, and it will last a lot longer too. Really, just try to buy products made of natural fibers instead of synthetic, and hang them up after use. Trust the sniff test. You’ll find you can get three or four wears before laundering.

Tags: 'Have, clothing, Don't, explained, To, wash, You