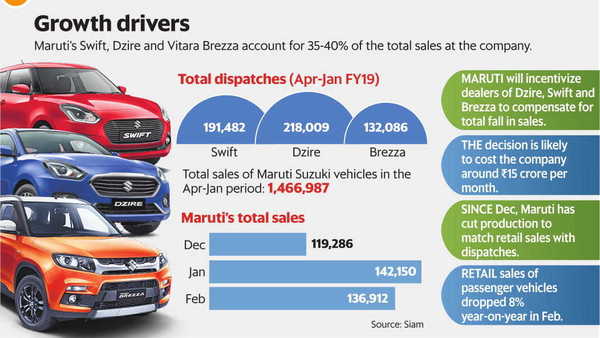 Margins have been increased by ₹3,000 per vehicle on Maruti’s Dzire (a compact sedan), Swift (a hatchback) and Vitara Brezza (a compact sport utility vehicle), said three people with direct knowledge of the development.

The step by Maruti Suzuki took effect in January and is expected to offer additional liquidity to dealerships at a time when demand has dropped. The dealers are also facing a credit squeeze after the crisis at Infrastructure Leasing and Financial Services Ltd (IL&FS) triggered a liquidity crunch in India’s banking system.

With auto sales slowing since September, dealerships are grappling with unsold stocks even as their operating expenses continued to swell.

To be sure, Maruti Suzuki is the first among India’s top carmakers to lift dealer margins, though the step can be a drag on the company’s profit margins. Maruti Suzuki also increased car prices from 1 January.

The first person cited above said the company is trying to help its dealers at a time of weak demand. “The dealers have been offering huge discounts and inventory has again piled up in February,” the person said, requesting anonymity. The companies “thought that revival has started from December and January after a bit of a pick-up in retail sales but February sales have slumped again,” said the person.

A spokesperson for Maruti Suzuki did not respond to emailed queries sent on Monday.

Retail car sales in India fell 8.25% from a year earlier in February to 215,276 units, the sharpest so far this fiscal year, according to the Federation of Automobile Dealers Associations (FADA), an industry body which tracks retail vehicle sales in India. Maruti has also trimmed its sales growth forecast for this fiscal year to 8% from a more than 10% growth forecast at the start of the year.

In January, Maruti dispatched 18,795 Swift cars and 19,073 Dzire cars from its factories to dealerships. It also dispatched 13,172 Vitara Brezza SUVs, according to data from the Society of Indian Automobile Manufacturers (Siam). Based on the January sales performance, the decision to increase dealer margins on the three models would cost Maruti about ₹15 crore per month.

Puneet Gupta, associate director at researcher IHS Markit, said it is possible for Maruti Suzuki to offer higher dealer margins since it is financially stronger than its rivals although the step would impact the company’s profit in the short term. “As vehicle sales have fallen sharply, this is a way to incentivize dealer partners since they have to maintain high inventory. Automakers in adverse times help their respective dealers and component suppliers when the demand falls in the market,” said Gupta.

Maruti dealers are also facing rising cost of setting up new showrooms and service centres as well as running existing establishments especially in metro and Tier 1 cities. The dealers have, therefore, been demanding an increase in their margins to enhance their profitability.

The second person cited above said overall operating cost has risen significantly in terms of employee salaries and rent paid for real estate. So, this is also another reason behind the increase in margin.

“This step taken may not have a huge adverse impact on the financials of the company since the prices of the vehicles have also been increased over the last one year. Hence, there won’t be a significant impact,” explained the person. The person said Dzire, Swift and Vitara Brezza comprise almost 35%-40% of Maruti’s sales volume, and the latest measure would help to stabilize financial health of the dealerships.

“Maruti’s dealers were not used to maintaining high level of inventory and operational expenses have also increased due to the increased number of unsold stocks. Also, Maruti wants the dealers to pass some part of this on to the customers as offers,” said the person requesting anonymity.

With the new incentive, dealer margins on the Dzire, Swift and Vitara Brezza has increased to 8-8.5% from around 6-7% previously, said the third person cited above.

To adjust to the falling retail demand, Maruti Suzuki cut production of vehicles in all its three plants from December.

The higher dealer margin, however, trails Maruti Suzuki’s tepid financial results in the December quarter when it posted a 17% drop in profit due to factors such as weak sales, higher commodity costs and marketing spend.

Average discount on Maruti Suzuki cars increased to ₹24,300 per unit in December quarter. In comparison, the average discount was ₹19,200 per vehicle during April-December 2018.

Maruti Suzuki’s profitability as measured by Ebitda (earnings before interest, taxes, depreciation and amortization) fell 36.5% from a year earlier in the December quarter to ₹1,910.5 crore and operating margin contracted by 5.9 percentage points to 9.7%.