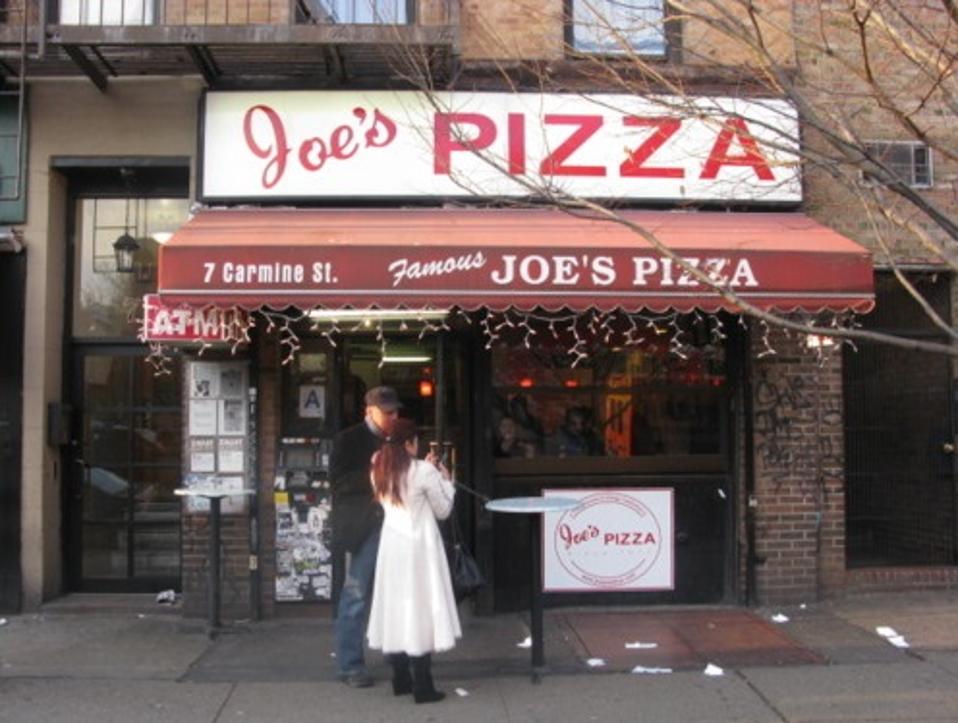 Walking along Bleecker Street in the heart of Greenwich Village these days, one encounters a host of people, mostly tourists, engaged in food tasting tours. A slew of companies such as Foods of NY Tours, True Tales NYC, and Secret Food Tours, offers a sampling of local foods including pizza, pasta, and dessert.

This reporter once overhead a tour guide tell his clients that many years ago every New Yorker returned home after school and made themselves an egg cream with U-bet chocolate syrup, milk and seltzer (he got the ingredients right). I’m a native New Yorker, and though I made egg creams on an occasional basis, the tour guide’s statement was pure hyperbole.

So how informative are these tours? This reporter accompanied guide Joanna Russell on the Foods of NY “Original Greenwich Village Food & Culture Tour,” which lasts three hours, stops at six to eight different eateries or shops, costs $54 and includes a booklet with many 10% off coupons on stores visited.

Accompanied by 14 tourists who hailed from wide-ranging places including Kona, Hawaii, Tucson, Dallas, Leeds, England, and Mendoza, Argentina, Russell, an actress turned tour guide, starts off by describing New York as, “It’s the city that never sleeps, but always eats.”

Russell emphasized that though the city has a select few Applebee’s and Olive Garden’s, what makes dining in Greenwich Village special is the mom ‘n pop stores that are independently-owned and give the city its special and irreverent charm.

For an early lunch, we start at Joe’s Pizza on Carmine Street off of Sixth Avenue, known for making one of the city’s best slices of pizza, a New York mainstay. It’s served on a paper plate, so a New Yorker can fold it twist it, chew it, and keep moving. “New Yorkers are always on the run,” Russell rightly points out.

She noted that Joe’s Pizza has been around since 1975 but had been located on the corner and moved up the block when the landlord tripled the rent, an all too-common New York City occurrence. Joe’s Pizza has expanded and has locations in the East Village and near Times Square and three others.

Russell points out that what makes New York City’s slice pizza unique is “its crust. It’s thin and crunchy on the outside and chewy on the inside.”  The mozzarella cheese and tangy tomato sauce coalesce for a wonderful taste experience.

The pie is sliced into 14 pieces and distributed one slice per guest. Each guest bites in, savoring the taste. It’s like a perfect lunch for $3, or maybe, if hungry, two slices.

The only one who doesn’t partake of the pizza is Joanna, the tour guide. Why isn’t she eating? “If I did at each stop, you’d have to roll me to the next restaurant,” she quipped.

Russell also points out that scenes in various movies have been shot at Joe’s Pizza including “Sex in the City” and Tobey Maguire’s “Spider Man.”

Next up on Bleecker Street is Oliviers & Co. (O & Co.), an olive oil shop. She passes out pieces of bread topped with tangy olive oil and notes how expensive truffle oil is.  She also explained that pigs used to dig out the truffles, but now trained dogs uncover them.

Next up is Faicco’s Italian Specialties, a vintage Italian butcher and pork store, owned by the Faicco family since 1900. Russell noted that the Faicco offspring who currently runs it rents from his mom who owns the building, so he won’t ever have to face exorbitant rent spikes.

Russell distributes rice balls, which consist of fried ricotta, mozzarella and parmigiana cheese that melt in your mouth. Each rice bowl costs a modest buck a piece, and the ones with prosciutto go for $1.50 each.

At our next step, Pesce’s Pasta on Bleecker Street, fish, as its name implies in Italian, is the featured item. The menu changes daily and that day featured grilled swordfish, seafood platter and tilapia.

“It’s the kind of food you’d expect to eat in Little Italy, but here it is in Greenwich Village. Only better,” Russell noted.

Despite the fish specialty, each guest is served one meatball that is light and almost fluffy. “You don’t need a knife because it’s steamed,” Russell pointed out.

At the Doughnut Project on Morton Street, lemon doughnuts are served, and the everything donut looks so gigantic that an entire Little League baseball team could cut it apart and share it.

After we taste some cheeses at Murray’s Cheese Shop, which is now, alas, owned by Kroger’s supermarket (goodbye mom and pop ownership), the tour concludes with a home-made canoli served fresh daily at Rocco’s Italian Pastry Shop.

But this isn’t only a food tour, it’s also a cultural tour. Russell explains how Greenwich Village started, why the Italian community moved there, how it’s been landmarked since 1969, and why so many three-story federal houses were built there.

On Bedford Street in the windy West Village, we stop at the smallest house in the city, nine-feet long, where Cary Grant and Bruce Springsteen’s drummer Max Weinberg once lived, and then peer at one of the last remaining wooden houses in the city.

In a post-tour interview, Russell says the stops on the tour were selected based on a combination of factors. “The food has to be delicious, do they have a good story, and can they accommodate us?” she said, noting that all are paid a fee.

Asked what she expected her guests to remember when they return home, Russell replied that Greenwich Village is different from the rest of Manhattan. “Chances are they’re staying in Times Square or midtown, where it’s crazy. When people come down to the Village, they realize New York has many tight-knit communities,” she asserted.

The tour mostly attracts “foodies who are looking for a way to explore the Village.” To research it, Russell listens to many podcasts like the Bowery Boys and the Food Network.

Ultimately what makes Greenwich Village different, Russell noted was “the mom and pop feel. It feels quaint here, which is a strange word to use for Manhattan. We know all the people in the shops. We want to give people an insider’s look at Manhattan, where local people go to these shops.”

Ironically, this native New Yorker who lives in the West Village hadn’t been to half of the shops visited. Even he learned something new.

Tags: a, city, food, Greenwich, How, in, Informative, Is, It, new, taking, Tour, Village, York