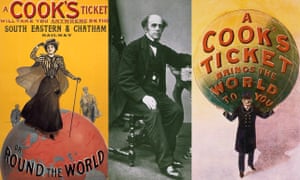 By today’s standards of all-inclusive resorts with free bars and infinity pools, the first Thomas Cook holiday, which whisked customers 12 miles by train from Leicester to a temperance meeting in Loughborough, sounds like a hard sell.

But the excursion, organised in 1841 by Derbyshire cabinet-maker Thomas Cook for 500 like-minded supporters, laid the foundations of a business that made him the father of modern tourism. The former Baptist preacher believed the ills of Victorian society stemmed largely from alcohol, and saw a chance to spread the word via Britain’s flourishing rail network.

It would be another four years before Cook got into the tourist business proper, organising train trips from Leicester, Nottingham and Derby to Liverpool – this time for profit.

Then, in 1846, he ran the first of the Scottish tours that would soon become a lucrative operation. He conveyed 350 wide-eyed Sassenachs by train and steamboat to Glasgow, and for customers travelling for the first time, he offered guidebooks such as Cook’s Scottish Tourist Practical Directory – which had a chapter headed “Is It Safe for Ladies to Join in Highland Tours?”

Within a decade, Cook was running continental trips: he personally conducted a trip from Harwich to Antwerp, Brussels, Cologne, Heidelberg and Strasbourg that ended up in Paris for the International Exhibition in 1855.

The world continued to shrink, and in 1873 Thomas Cook completed his first round-the-globe tour, marketed as “London to London”, for 200 guineas. About this time the firm became one of the first to use travellers’ cheques: it called them “circular notes”.

John took over in 1879 and ran the firm until his death 20 years later, when his three sons inherited Thomas Cook & Son. Its success continued into the 20th century as the skies opened up, with the company chalking up another first when it offered “pleasure trips by air” in 1919.

In 1928 the family sold up to the Belgian owners of the Orient Express, but the second world war saw it become part of the nationalised British Railways. After the war, sales took off again with the era of package holidays. By 1950, more than a million Britons were travelling abroad each year, mainly to France, Italy, Spain and Switzerland.

Thomas Cook returned to private ownership in 1972 and has seen a series of mergers and takeovers. In 2007, it merged with the UK-listed owner of Airtours, MyTravel Group, which nearly collapsed in 2011 but was bailed out by its banks. Now, 178 years on, in an industry its founder would not recognise, Thomas Cook may have come to the end of its journey.