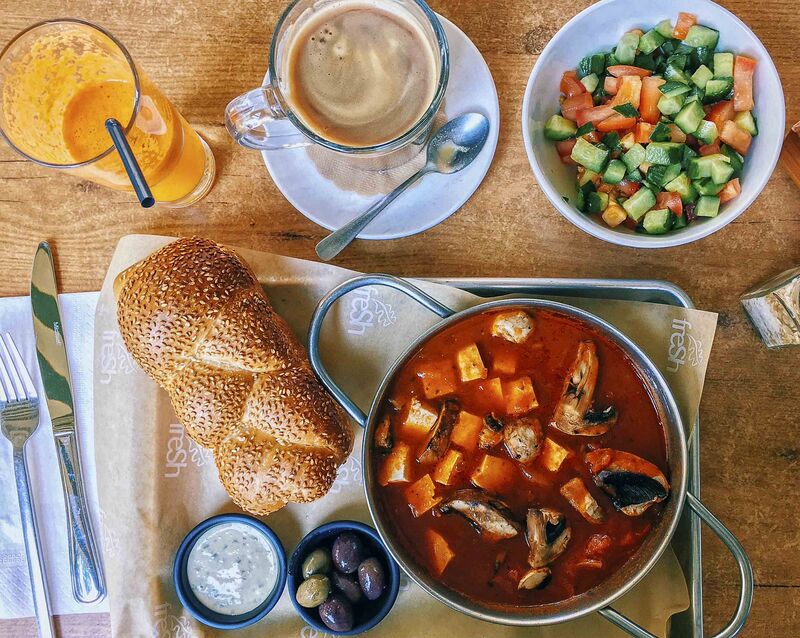 As Israeli and Palestinian heads of state grow more reluctant to show up at the negotiating table, pioneering travel outfitters are bridging the gap between the two cultures in a different way—by encouraging visitors to break bread with locals on both sides of the unofficial border.

“We wanted to offer an unbiased trip that visited both destinations so that travelers could get a real sense of the day-to-day reality for Palestinians and Israelis,” explains Cara Brown, food product manager for small group tour operator Intrepid Travel. Since 2015, her team has been piloting a version of the company’s new, nine-day Real Food Adventure in Israel and the Palestinian Territories; beginning in March, the trips will be available for $3,165 per person on a near-monthly basis, including stops in Tel Aviv, Haifa, Nablus, and Bethlehem.

“We’re always trying to push the boundaries,” says Brown, whose employer often focuses on providing off-the-beaten-path cultural experiences. This time, the company has done it literally, crisscrossing the dotted line between Israel and the West Bank that many tourists are afraid to approach. “We want to raise conversations and awareness and break down barriers,” she explains, and how better to do it than through food?

Intrepid’s trips begin in Tel Aviv, the restaurant capital of the Middle East, and end in Jerusalem, where travelers check out a handful of religious sites before tucking into bowls of hummus at one of the Old City’s hummusiyas. In between, they take guests to an Israeli winery near the Negev desert, to a Palestinian dessert bakery in Nablus, and to a cooking demonstration in the village of Buq’ata, populated by Druze Arabs. All of the activities are guided, primarily by Palestinian group leaders licensed by the Israeli Ministry of Tourism. (The Israeli credential process is important—it required guides to pass difficult, balanced tests that prove their comprehensive knowledge.) “We want to expose travelers to many different experiences,” says Brown. “It lets people form their own impressions.”

Among the activities she’s proudest to offer are visits to a tahini plant in Nablus, a Palestinian city in the northern West Bank, where guests can watch artisans pound sesame seeds into the smooth paste that’s at the heart of some of the region’s most famous dishes, and to a cooking class in the same city. “The cooking class is led by a local Slow Food chapter that’s run completely by Palestinian women,” explains Brown. “It’s a great example of how we can support local communities—and in this case, women—which is fantastic.”

The experience begins with a trip to the local market, or kasbah, and ends with a lunch of kousa mahshi (rice- and beef-stuffed zucchini) or lemony warak dawali (stuffed grape leaves). “We sit down and have lunch with the local women and talk about their lives in their small town; it’s a highlight of the trip, for sure,” says Brown. As a rule, conversations about politics are never introduced by Intrepid’s guides. “We let that topic unfold naturally and organically,” explains Brown.

Intrepid also supports independent businesses via its choice of accommodations. “As a brand, we tend to stay away from western chains because we want to contribute to the local economy,” says Brown. “The infrastructure in the Palestinian territories isn’t as advanced as in Israel, but passengers tend to be pleasantly surprised by the family-run places we stay—they’re generally three-star, boutique-y hotels, but the people who run them take a lot of pride in their operations.”

A Trip You Can’t Quite Plan Yourself

Intrepid is the only international tour operator offering trips along these lines, though independent agents who specialize in Israel are able to facilitate similar experiences on a bespoke basis.

“I’ve been doing this for over a decade,” says Joe Yudin, who has been inviting his guests to explore the West Bank via his agency, Touring Israel. Of the 200 to 300 trips to Israel he plans each year, 30 percent include a day trip to the West Bank, often with guides who identify as Israeli Arabs, many of whom live in Jerusalem. “It’s the best way to bridge the gap and be balanced,” Yudin tells Bloomberg. (He also offers video introductions for each guide on his website so that guests can choose personalities that they’ll jibe with.)

There, he organizes meals in Palestinian homes, tours of a hummus factory in Ramallah, and restaurant crawls in Jericho or Bethlehem. “Ramallah is absolutely where the food scene is hottest in the Palestinian territories,” says Yudin. It’s also the Palestinian nightlife hub—Touring Israel regularly organizes bar hops that focus on hookah spots and jazz clubs in Ramallah.

The key to these experiences is knowing when to go and when to stay away. “You have to be careful,” Yudin explains. He does that by monitoring hyper-local news. When a rabbi was recently murdered in the West Bank, for instance, it didn’t make international air waves—but it did stir up demonstrations and stone-throwing attacks. He wouldn’t have let clients go into that area while tensions ran high. “When it’s quiet, we go in; when it’s not quiet, we stay away,” he says. Usually, that’s not a problem. “Thousands of people go back and forth every day—it’s totally safe now,” he explains.

For its part, Intrepid follows a similar strategy. “The safety of our travelers and staff is our first priority, wherever we travel,” says Jenny Gray, Middle East product manager for the company. “We constantly monitor all border and routing situations through official travel advisories and advice from our local teams, who have extensive networks on the ground, both in Israel and the Palestinian Territories.”

As for the logistics of crossing checkpoints, Yudin says: “It’s not a big deal. You can hop in a taxi in Jerusalem and be in Ramallah in 10 minutes.” Just expect some simple questions and potential bag checks when coming back in the opposite direction, he cautions.

When Intrepid launched its first food trip to Israel and the West Bank, it was part of a series of company experiments on up-and-coming destinations. “The decision to expand departures for year-round travel in 2018 resulted from a 70 percent growth in U.S. bookings to the Middle East and a 41 percent growth on Real Food Adventures,” explains Brown.

That should be no surprise, says Yudin, pointing to the rise in popularity of Middle Eastern cuisine at the hands of such chefs as Michael Solomonov (of Philadelphia’s Zahav and New York’s Dizengoff), Alon Shaya (of New Orleans’s Shaya), and Yotam Ottolenghi (whose eponymous restaurants are dotted all around London).

Even within the region, understanding of Middle Eastern food is evolving quickly. Young Israelis tend to travel extensively after finishing military service, and they come back home with heads full of global flavors. “The post-army travelers are completely responsible for the diversification of the food scene here—and the Palestinians are getting in on the act, too. They don’t want to get left behind,” explains Yudin.

Of course, food is also the easiest way to connect with locals, to tap into their experiences and understand the region’s complex politics. “There are fights between Lebanon and Israel about who has better hummus, whose national dish it is. The whole issue of whether there is such a thing as Israeli cuisine has become politicized,” says Yudin.

Understanding that there’s more to Israeli or Palestinian food than hummus may be the start of untangling that dilemma—and perhaps a two-cuisine solution is the finest diplomatic road of them all.

Tags: 'Between, And, Bridge, food, Gap, Israelis, Palestinians, the, these, To, Tours, use